I agreed to lead an expedition to Africa: testing courage where I least expected it.

On June 21, 2019 I met up with 13 other Americans in London on our way to Malawi for a 2-week high school building expedition.  I was their leader, and my courage was tested, but not how you’d think.

I’ve been to Malawi, a small, very poor country in southern Africa 2 other times.  I had also visited Kenya, Zimbabwe, and had lived in Egypt when I was young, so the prospect of visiting Africa was exciting.

I had led a few similar expeditions before and helped to lead an expedition specifically to Malawi to work on the exact same school 2 years before, so it wasn’t the project that required my courage.

It was at 10:07 in the morning, turning away from the Kenyan airways desk in Nairobi, 2 hours after our flight to Malawi took off, about to deliver the news to 13 Americans who had already been flying or waiting in airports for 32 hours that our replacement flight to Malawi was set to take off at midnight…the next day.

You see, I too had been traveling for 32 hours, in the same pair of pants.  I hadn’t eaten the breakfast on the flight from London and it was well past my feeding time.  I also hadn’t drunk enough water, or slept very well on the plane.  I was exhausted, hungry, and I desperately just wanted to get to Malawi to my hotel home for the next 2 weeks and get this long-anticipated expedition started.  And I wanted a fresh pair of pants.  Now I was stuck in Nairobi for 36 hours, I didn’t know the quality of the hotel the airline would put us up in, so I didn’t know whether I’d have a decent shower, a comfortable bed or an easy way to find my next meal.  (I have a very strict feeding schedule.)  I also needed to figure out what the heck I was going to do for the next 36 hours in a city I didn’t know, with these 13 people, 10 of whom I met for the first time in London the night before. 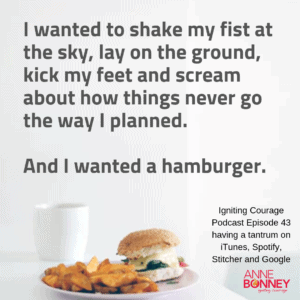 to get us where we were going.  I wanted to shake my fist at the sky, lay on the ground, kick my feet and scream about how things never go the way I planned.  And I wanted a hamburger.

As I turned around, ready to heave a big sigh and mope over to them, lean on my boyfriend for comfort, and lament about how crappy the situation was.  (and ask if anyone had a snickers bar.)  But as I turned, I saw 13 sets of eyes looking at me, wondering what was about to happen, and looking to me to communicate that somehow, it was all going to be ok. 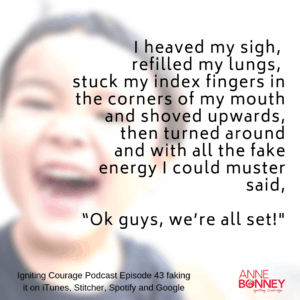 I was their leader.  This moment would define the group’s attitude for the rest of the trip, and 2 weeks is a long time with a bunch of negative people.  How I presented this would tell them how to respond.  I turned back around to the desk as if I’d forgotten something.  I heaved my sigh, refilled my lungs, stuck my index fingers in the corners of my mouth and shoved upwards, then turned around and with all the fake energy I could muster said, “Ok guys, we’re all set!  We’ve got a hotel, a ride and tickets on the next flight out of here tomorrow night!  Let’s go find a flat surface to lay down, and I’ll get in touch with Kindee to see what kind of adventures we can cook up while we’re here!” and the mood was set.

Often it takes a lot of courage to not express your negative feelings, especially when that’s the only thing you want to do, but remember, your positivity matters, and is contagious.  It gives those less courageous permission to find a positive attitude, and could turn around the atmosphere of the whole thing.  Whether you have the role of leader or not, finding a positive approach (or at least an outlook that doesn’t have a rain cloud permanently pouring on everything in sight) means you are a leader.  For some of us, it’s not our default setting, and in the moment, it’s often not what we want to do, but it leads to so much better outcomes.

like.  Happily, we ended up having a blast.  We went to a school that our non-profit supports, an elephant orphanage to see adorable baby elephants rolling in the mud, and the giraffe center to meet and feed some very tall and very cool ladies.  We also had some delicious meals, and the hotel was gorgeous, so by the time we finally made it to Malawi, we had bonded, and ended up having a spectacular time on the whole trip.

And it was a good thing, because every day there was another twist or turn or change of plans and the whole group rolled with it, laughed and we came out stronger and happier people, and lifelong friends.

Unfortunately I can’t say the same for those pants I was wearing.  At the airport in Nairobi the next night, while we were waiting to board our Malawi flight, I knelt down to take someone’s picture, and the rear seam split.  They were old pants, and after making 10 new friends, traveling for 65 hours on 3 continents, on 5 planes, and to 2 animal attractions, they gave up the fight.  Fortunately my luggage met me in Malawi, and I had other wardrobe options that functioned fine for the rest of the trip.

So have the guts to buck the negativity trend.  Negativity might feel good in the moment, but it won’t for long, and contributes to a pretty yucky environment overall.  Have the courage to spread the sunshine.  People may think you’re a happy little dipshit, but there are way worse things to be known as, if you ask me!  (and you’re listening to this podcast, so you apparently did!) 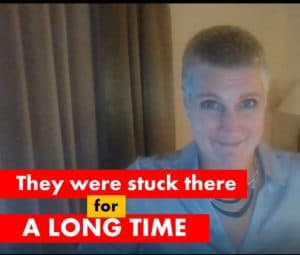 If you want to listen to it on the podcast, click any of the pictures above or find Igniting Courage Podcast where all great podcasts are played!